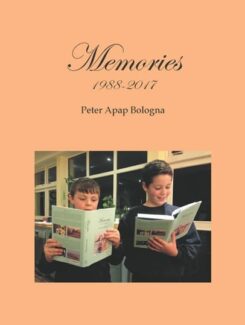 The third volume of Peter Apap Bologna’s autobiography takes us from 1988, when he was 47, to the present day. He celebrated his 76th birthday at a stylish lunch with close friends just a few weeks before the publication of this book. Peter had started to prepare for his return to Malta in 1988, after fifteen years abroad. The overriding factor that triggered his return to Malta was the change of government in Malta after sixteen years of regressive socialist rule that had precipitated his departure in the first place.
In the opening chapter of this volume, he describes well the surge of optimism that had swept Eddie Fenech Adami and his Nationalist Party into power on 12 May 1987. That victory changed the face of Malta and can be seen, thirty years later, to have been – together with Malta’s accession to the European Union in 2004 to which it led – the pivotal event in the country’s post-Independence history.
Perhaps the most striking and endearing aspect of this volume of memoirs is the spirit of optimism that Peter exudes. His book starts with a quotation by Winston Churchill: “I am an optimist. It does not seem much use being anything else.” It has been Peter’s good fortune to be born with a positive outlook on life. He can always see a glass half full, not half empty. It is not a natural Maltese quality and all the more appealing for that. Optimism is the golden thread running through this story. For, while there are many happy moments in this book, Peter also tells, honestly and without rancour, of several sadnesses and setbacks since his return to Malta. His share of business problems, too, are not shirked or down-played. But despite misfortunes, Peter recovers to face life’s challenges without vindictiveness or any trace of self-pity.
The centerpiece of this book – and his lasting legacy to Maltese perceptions of art – is his founding of the Melitensia Art Gallery, in Lija in the autumn of 1988. Before it closed eleven years later, it became the focus for the best and most exciting exhibitions of Maltese and foreign paintings of Malta. It set standards of presentation in a public gallery in Malta of paintings, old maps and prints of Malta, as well as book collections, which have never been bettered. The exhibitions were stylishly presented and. the book is packed with photographs of many of the exhibitions and the beautiful paintings that were on display.
No account of the Melitensia Art Gallery and its impact on Maltese critical discernment of art can pass without mentioning Peter’s wife, Alaine, who arrived in his life in July 1989 and whom he married the following year. Her great love and support has contributed hugely to Peter’s life, as well as leading directly to their involvement with the first Fondazzjoni Patrimonju Malti exhibitions under the redoubtable Maurice de Giorgio.
This volume brings this fascinating trilogy of Memories to a close. Peter’s recollections are well written and lavishly illustrated. It is worth buying the book for the photographic record alone. His sharp eye and excellent memory mean his recollections are vividly described. They bring to a fitting end a lively account of the last seventy-five years of a certain kind of Maltese life – more socially stratified and in rapid transition between colonial Malta, independence and the country we know today.
It follows closely in the footsteps of Herbert Ganado’s seminal Rajt Malta Tinbidel, which took the reader on a journey through the story of Malta during the first part of the last century. It is a most fitting companion to it.
By: Peter Apap Bologna
Format: hardback
Pages: 264