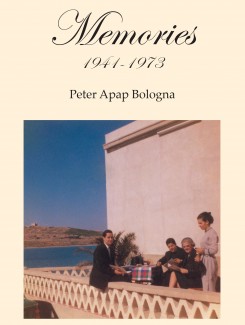 This volume of Memories is the first of a planned trilogy covering the three different phases of my life, as I see them, namely: 1941-1973 ––  birth, education, growing up in Malta, studying Accountancy in London, marriage and children; 1973-1988 –– emigration to England, and the years spent abroad; 1988 to the present –– return to Malta, Alaine, Melitensia Art Gallery, and after.

Over the years, from childhood, I have kept a mass of letters and photos, newspaper cuttings, and diary notes (though I never kept a proper diary, I did write occasional pieces). This enables me to recall and record much that happened over a lifetime.

Volume II will take us from merchant banking in London and New York (from the end of 1973 to 1984), during which we had homes in Chiswick, London, and Connecticut in the USA, to book dealing in West Cork, Ireland (1984 to 1986).

The Ireland move came after I resigned from Chemical Bank and decided to follow my passion: book collecting. We settled at Cliff Top, our beloved home in West Cork, in 1984. There I started a mail order rare book business, issuing catalogues on various subjects. In the banking years I had accumulated a collection of about 10,000 books, which formed the basis of my business stock. This was a wonderful phase of my life, as we had a lovely family life with our daughters and Annie’s parents.

Volume III will be about my move back to Malta after Annie and I went our separate ways. It begins with the Melitensia Art Gallery in Lija, meeting my second wife, Alaine, and the wonderful Garden House where we lived. It then goes on to describe retirement in Sliema, my work with St Patrick’s Salesian School for boys with difficulties, and other enriching projects we have rejoiced in.

Throughout, the volumes reflect how Malta has changed and grown in this critical time in its history as it moved from a British colony to the proud nation state it is today. The volumes, anecdotal and factual, full of the personalities that peopled the Malta I knew in those days, tell my own story, much of which mirrors this bigger story of Malta. At the last General Election, I voted Labour for the first time, believing that Joseph Muscat’s New Labour was bringing a breath of fresh air into our political life. I could see, like many others, that the bad days under Old Labour were in the past, and that Malta and we, the Maltese, have changed almost beyond recognition.