A Materialist Revision Of Maltese History 870-1919 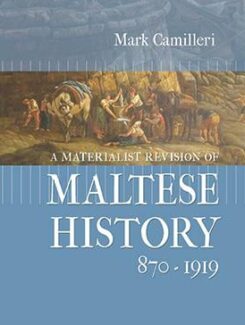 A Materialist Revision Of Maltese History 870-1919

A Materialist Revision Of Maltese History 870-1919.

Mark Camilleri’s new book, A Materialist Revision of Maltese History: 870 – 1919 is a critical reading of Maltese history. Influenced by Hegelian philosophy and Marxist materialism, it poses new critical perspectives based on previously known and accepted historical data. Some interesting primary sources of note, which will be revealed for the first time, include the police logbooks of the early 20th century.

This book’s focus on the mind and material conditions of the ‘ordinary’ Maltese people offers a fresh look at Maltese history. This book is Maltese history as it is, without the grand narratives and beautiful anecdotes which make Maltese history novel and glorious. There is in reality nothing that glorious about Maltese history; on the contrary, Maltese history was sad, dark, tragic and bleak. The Maltese people lived in misery, poverty, insularity and ignorance and their survival in terms of wealth and security depended on their rulers. The Maltese elite was only concerned with making easy profits rather than with contributing to the over-all development of society and the well-being of its compatriots, while clerics left the people mired in ignorance and stupidity so as to keep absolute control over the Maltese mind.

Nevertheless, the Seventh June Riots of 1919 would prove to be a turning point for both the exploited majority and their superiors, their patrons, their leaders and their clerics. This was a point in Maltese history when the masses became conscious of their freedom and tried to overturn the objective conditions of their lives.