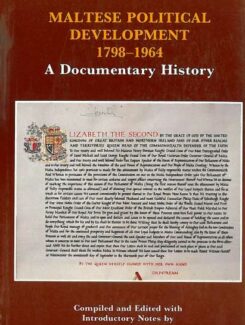 – a documentary History complied and edited with introductory notes by Henry Frendo.

In this volume on Maltese political development, Professor  Henry Frendo has compiled, edited, introduced and annotated an anthology of texts – Letters, editorials, speeches, inquiries, despatches, conferences, broadcasts – in French, Italian, English and Maltese, with reference to the period of the French and of the British occupations – an era covering over 166 years. In presenting the first such documentary history of Malta, he traces events from the Maltese popular insurrection of September 1798 to the origins of Maltese statehood in September 1964 and Malta’s membership of the Council of Europe.

In his writings since 1970 on party politics, colonial nationalism, language and identity, the mass media, migrants and refugees, one of Frendo’s primary concerns has been the relationship of culture to politics, especially in the ‘British’ Mediterranean.

A former daily newspaper editor, a UN diplomat in different countries, and since 1988 Professor of History at the University of malta, Henry Frendo has been an international visitor in the U.S.A and in Germany, a Commonwealth Scholar at Oxford, a Guest Lecturer at Florence, a consultant to the Australian National University, a Salzburg Fellow and a Guest Professor at Augsburg.