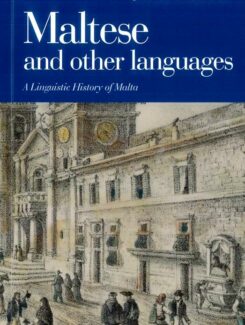 Malta’s position at the centre of the Mediterranean attracted various settlers and conquerors through the ages, with the result that many languages have been spoken and written in the islands.

Carthaginians, Romans, Byzantines, Muslims, Normans, Swabians, Aragonese, Castilians, the polyglottic Knights of St. John, the French and Great Britain left their mark on the Maltese language which is now an intriguing fusion of Arabic, Sicilian, Italian and English words.

This book tells the story of how this blend came about. It focuses on Maltese and explains how contact with the high languages helped the local tongue keep pace with social development.

It also describes how the process of standardization led to its achieving official status in Malta in 1934 and its recognition as an official language of the European Union in 2003, a fact which is envied by many of the larger regional languages of Europe.

Be the first to review “Maltese And Other Languages” Cancel reply