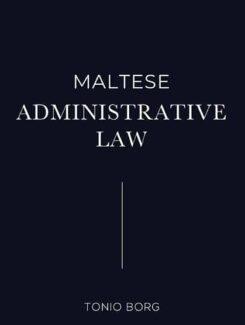 Tonio Borg’s Maltese Administrative Law is the first comprehensive textbook on the subject. It analyses the main components of Maltese administrative law, the development and characteristics of the subject, the structure of the Public Administration in Malta, the functions of the Executive as laid down in the Constitution and ordinary law, and the Executive’s relationship with the other organs of the State and the private individual.

The book follows the development of administrative law in the last century into a subject in its own right. The cornerstone of the subject remains the judicial review of administrative action. Borg studies the development of judicial review in Malta, the application of English common law and the copious jurisprudence on judicial review that has developed mostly after the Blue Sisters case in 1980 and the enactment of article 469A of the Code of Organization and Civil Procedure in 1995. The book also examines the attempts made by Parliament to restrict such review and the Courts’ reaction to such attempts and restrictions. Finally, the book also analyses recent amendments extending judicial review to cover decisions by the Attorney General’s Office.

Be the first to review “Maltese Administrive Law” Cancel reply