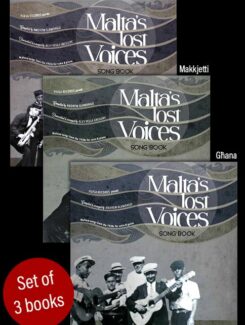 Driven by the gramophone industry’s impetus to produce records featuring Maltese music, the island’s finest composers and songwriters were engaged for the first time to write original music to be recorded on disc and published for the local market. This compilation showcases a strong influence of foreign dance music styles, as seen in the selection of foxtrots, waltzes, tangos and serenades, popular on the island at the time. Now the Maltese could finally have access to playback music they could enjoy and dance to in their own homes.

With the unique opportunity to record, popular theatrical artistes documented their humorous songs and comic sketches known as makkjetti on disc in the1930s.

These recordings are delightful artefacts of a pre-television era, a snapshot of Maltese entertainment prevalent at the turn of the last century.

Acted and played out by well-known male and female makkjettisti, the sketches recorded both locally and overseas are evidence of an established local culture of slapstick theatrical comedy and vaudeville acts popular at the time, which provided entertainment for the urban masses.

For the first time in history għana musicians, like musicians elsewhere, had the opportunity to press their songs on the first records of Maltese music. As part of the record catalogue featuring a variety of musical styles, the bards of this culture recorded their personal poems, written or improvised, their guitar playing, and their unique voices in studios locally and overseas.

The result was the publication of dozens of 78rpm records featuring the more renowned għana singers and guitarists of the day, who carried out live performances in the studio. The songs in this collection aim to represent the variety of forms featured on the records, as well as provide information about the singers who minted their names on these discs in the interwar period.

This publication is supported by Arts Council Malta.

Format: paperback (set of 3 books each having 24 pages)