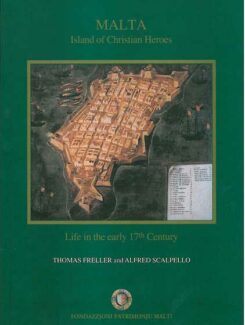 Malta – Island of Christian Heroes is a translation of the archaic German book Christliche Helden Insel Maltawritten by Johann Friedrich Breithaupt and published in 1632.  The book describes the journey to Malta via Italy and Sicily undertaken by Breithaupt and his two companions.  Once in Malta, the detailed description ranges from the landscape, the people and the fashion to the fortifications, the palaces and the election of a Grand Master.  Malta – Island of Christian Heroes was the most detailed description of the island until Gio. Francesco Abela published his Descrittione di Malta in 1647.
Thomas Freller is a German scholar and author who lives in Berlin and is a Ph.D candidate at the University of Mainz.  He has publishes several books on Maltese and Sicilian history.  Alfred Scalpello lectures in German at the University of Malta and has translated several literary works into Maltese.