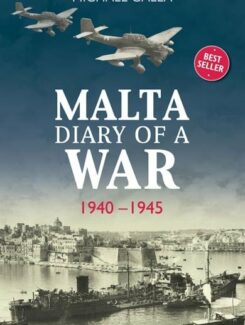 Malta. Diary of a War is a lasting tribute to the brave garrison and the heroic civilian population of Malta who either fell victim during or survived the epic siege of World War Two. Because of its geographical and strategic position, Malta played a most vital role first as an outpost of defence and then as an advanced base for attack. From a beleaguered island, Malta became a besieging driving force; from a defensive base it became an offensive platform intercepting Axis convoys going to North Africa and then becoming crucial during the invasion of Sicily.

Malta. Diary of a War is a graphic day-to-day description of the terrible ordeal experienced by the people of the Maltese islands. It is the inside story of the war as the Maltese lived and survived it. This is the Malta Story: the war as seen from a Maltese perspective.

Malta suffered a much higher percentage rate of casualties through enemy action than any other country with the exception of Germany. Without the shelters cut into the living rock, the blitz in Malta would have had a more disastrous and catastrophic effect and perhaps the war would have taken a different turn altogether.