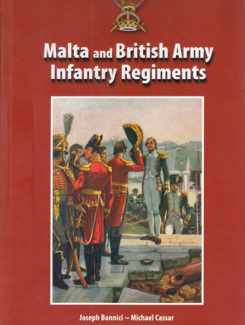 This book explores the fascinating dual world of British Army Infantry regiments in Mallta. While no strangers to foreign occupation, for the Maltese the British garrison was the largest ever and it endured for several decades until the end of the military base. Such a small island yet so important and adjunct of Empire. Consider that of all the regiments of the line of the British Army it is thought that only the 1st Bn. Irish Regiment was never in Malta.

In a world lost forever it is incredulous to recall that thousands of men, women and children from the British Isles lived parallel lives with the Maltese, unwittingly contributing to their social development and invisible roots over the years. Also that there are thousands of families out there who are probably unaware of their centuries-old connection with the island.

The story of the British Army in Malta is testimony to the synonymous abstractions of memory and time. Recollecting the past is also an affirmation that time has passed and is recorded as history in our psyche as well as in books, computers and the visual arts.

However, history, as evidenced by, for example, the rings of a tree, geological strata and the Rosetta Stone can only furnish us with a qualified record since nothing can replace or recreate the real-time past of sights, sounds, smells and language, amongst other things. Only climate and topography provide the slow changing constants (the scirocco for example, continues to annoy us today as much as it did Tommy Atkins while he was serving in Malta).

Nevertheless these limitations only serve to provide the challenge and stimulation to construct a record for posterity covering various aspects of army life in Malta based on official regimental histories, journals, first  hand accounts, anecdotes and visual material that, brought together adds yet another piece to the Maltese social jigsaw and the nation’s history, memory and time.