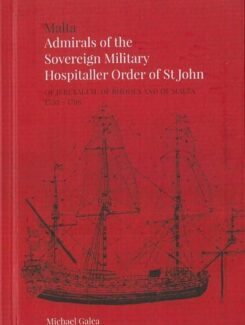 Malta Admirals Of The Sovereign Military Hospitaller Order Of St. John – of Jerusalem, Of Rhodes and Of Malta 1530-1798

The Order of the Knights of St John of Jerusalem was from its very beginnings a Hospitaller Order. It was founded in Jerusalem in the mid-11th century to provide shelter to the Christian pilgrims to the Holy Land.

Driven out of the Holy Land by the Infidels, the Order moved to Cyprus (1291), then to Rhodes (1310) and later to Malta (1530). Living on an island over a span of more than half a millennium the Order had, out of sheer necessity, built a formidable fleet as it was continuously living under the threat of the Ottoman Porte.

Whilst the main object of the Order was the running and the organization of the Hospital, the feats and the achievements of the navy constituted the Order’s prestige on the high seas.

At the head of the Order’s navy was the Admiral, who was the chief of the Langue of Italy and in charge of naval affairs.

This book deals with the erstwhile Admirals of the Order relating to the period of the Order in Malta (1530-1798). Throughout this period there were 198 Admirals.

The chronology of the Admirals embraces a glittering array of names and titles of scions of eminently noble families of Italy.

Be the first to review “Malta Admirals Of The Sovereign Military Hospitaller Order Of St. John.” Cancel reply