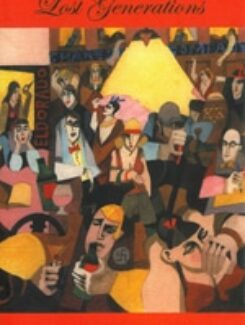 is a novel, though more a work of faction than fiction. The author no excuses for that, for what prompted him to put it together over many years was the terrible sense of horror he experienced when learning of the consequences of European politics inn the twentieth century.

Lost Generations covers a span of twenty-seven years between the end of The Great War and the end of the Second World War. The hundred million human casualties of the two wars affected certainly more than one generation. Apart from the generation slaughter and the horrors of war, the Holocaust added a dimension of evil never before imagined in human history. This story reflects the enormity of such senseless carnage and devastation, and the sheer inhumanity of civilizes nations.

Arriving in Paris in 1923, Larry Sterne, a rich young man without ties, finds himself drawn into the glamorous and louche society of the American and British expatriates. However, conscious of his Jewish antecedents, he becomes totally involved with his Jewish relatives and the rising tide of anti-Semitism in Europe. Through his friend and British diplomat Harold Nicolson, he meets Winston Churchill and Eddie Marsh, and is also drawn into joining the Daily Express in Berlin. There he and his boss Seftn Delmar are admitted into the inner circles of the Nazi hierarchy, including direct contact with Hitler.

Later, as war looms, through his American friends from the expatriate days in Paris, he is recruited into the OSS just as it is being set up by ‘Wild Bill” Donovan. From there he becomes directly involved with the dramatic events of the early days of the Second World War, when he serves as the secret eyes and ears of President Roosevelt in the meetings between the British and the French. Through the War he devotes all hiss efforts to saving Jews from the Nazis.

By 1945, having lived through the evil and inhumanity of the war and the Holocaust, he is left saddened and disillusioned, but still clinging to his ultimate faith in humankind.

Be the first to review “Lost Generations.” Cancel reply