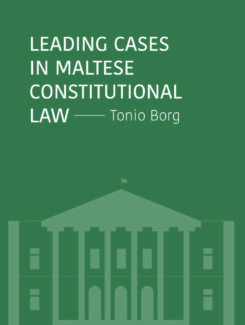 This collection of constitutional cases comprises 100 landmark decisions of our Courts of Law, particularly of the Constitutional Court, in the last one hundred years. Prior to 1961, where there was no human rights chapter in our Constitution, controversies usually hovered over election of candidates to the Legislature, or the illegal deportation of British subjects during the war. The famous and audacious ultra vires judgements delivered by Chief Justice Sir Arturo Mercieca following the suspension and withdrawal of the 1921 self-government Constitution are included in this work. In the post-Independence era, most decisions have focused on human rights and their gradual development into a subject in its own right. Does a person charged with a criminal offence have a right to access to a Court and a Court alone? Does he have a right to choose his own lawyer? Are statements given by a suspected person valid if a lawyer was not present during Police interrogation? Are laws enacted in breach of European Union legislation unconstitutional? Does a foreigner enjoy the right to address a political meeting in Malta? What is the meaning of ‘adequate compensation’ in the context of expropriations? Are Malta’s restrictive rent laws compatible with the Constitution and the European Convention on Human Rights?

These and several other points and issues of a constitutional nature are contained in this book. Each case is preceded by a short summary. At the end of each judgement, reduced to a citation of the main parts, the author registers his own short comments on each case. All judgements have been translated into English from the original Italian version (pre-1934) and original Maltese language.

Dr Ivan Mifsud, Dean Faculty of Laws, University of Malta in the foreword to this titles states, “For decades, Tonio Borg has taken centre stage insofar as Constitutional Law is concerned. He has lectured extensively since the late 1980s, he practiced as a constitutional lawyer for a number of years before assuming various public offices, and more recently has returned to the world of academia with renewed vigour. Having penned the much-acclaimed A Commentary on the Constitution of Malta, he has now followed with another first – Leading Cases in Maltese Constitutional Law. The icing on the cake is the commentary at the end of each chosen ‘leading case’; canny observations of a veteran authority in the field, which will aid the reader in the process of reflection and contemplation so vital to the understanding and appreciation of Constitutional Law.”