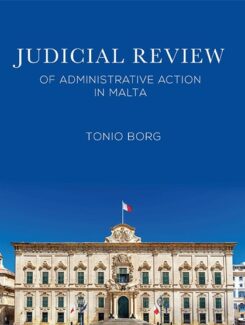 Dr Tonio Borg’s Judicial Review of Administrative Action in Malta is the most comprehensive and detailed book published so far on this important subject. It analyses the jurisprudence of the Maltese and foreign courts – with more than one thousand judgements cited, relating to the power of courts of law to review the actions of the Administration, control the power of the Executive to pass delegated legislation, and review decisions of judicial organs other than the courts of law. The grounds of review under Maltese law, namely, breaches of the Constitution, excess of authority, breach of rules of natural justice and procedural ultra vires, abuse of power and unlawfulness, are examined one by one and the relative jurisprudence analysed and criticised. The book, which is mainly case-law driven,  criticises the current fragmentation of the law on judicial review in Malta and proposes remedies to the current legal position.