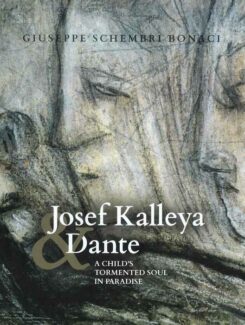 This year marks the 700th anniversary of the death of Dante Alighieri. To honour the Italian poet in the most fitting manner during this anniversary year, the Comitato di Malta of the Società Dante Alighieri embarked on a series of cultural activities that commemorate Dante himself as well as those who have contributed to the Society and its mission since its foundation.

The highlight of our cultural calendar for the Dante anniversary is a project under the direction of Prof. Giuseppe Schembri Bonaci that analyses the intense dialogue that Josef Kalleya, the Maltese artistphilosopher, had with Dante’s Divina Commedia. This book is part of this project. Kalleya’s dialogue with Dante gave rise to over a thousand drawings executed throughout his life, with the majority produced between the 1960s and the 1980s. Prof. Schembri Bonaci defines Kalleya’s works as line-as-prayer and structures his essays in three parts, namely Inferno, Purgatorio, and Paradiso. The first volume concerns Kalleya’s engagement with the Inferno. The project will also include a study by Dr Nikki Petroni, who situates Kalleya’s and other Maltese Modern artist’s works within the wider socio-political context of late nineteenth and twentieth-century Malta, and further engages with the history of the Società’s Comitato di Malta.

Be the first to review “Josef Kalleya And Dante” Cancel reply