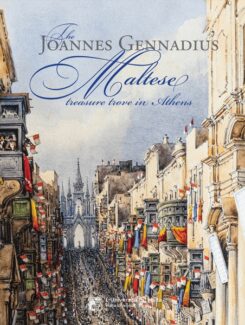 The Gennadius Library in Athens has a rich trove of holdings of Maltese interest, ranging from 16th century prints to 19th century original watercolours and photos of disappearing Malta, a veritable feast for the eyes of the Melitensia afficionado.

This handsome volume is testament to the breadth of the materials collected by the bibliophile Joannes Gennadius (1844-1932), which are now part of the Gennadius Library of the American School of Classical Studies at Athens. The Library houses a richly diverse collection of books and rare bindings, archives, manuscripts, and works of art illuminating Greek culture and civilization from antiquity to modern times.