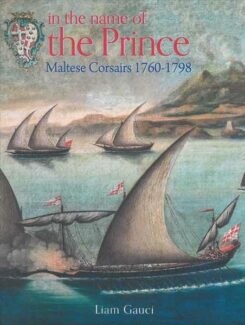 Maltese corsairs were the feared commerce raiders of the early modern world. Their story has been traced through thousands of documents and manuscripts. A world of family hardships, sea battles, slaves, renegades, shipwrecks, and rum unfold through these pages. An in-depth look at the privately owned ships that sailed out of Malta to profit from war in the name of the Prince and the Grand Master of Malta.

The book written by Liam Gauci entitled ‘In the name of the Prince: Maltese Corsairs 1760-1798’, is the first of its kind dedicated to the lives of these seaborne raiders. These raiders lived within a legal framework. These were not pirates, these were Corsairs. Corsairing was authorized by the state and practised by nearly all Mediterranean rulers. In the Name of the Prince – Liam Gauci The ruler himself participated in profiting from the plundered goods by the virtue of a letter of marque issued in his name. The protection of this letter made the profession a respectable, profitable vocation. Pirates meanwhile practised the same violent plundering on the high seas. However the pirate had no letter signed by his rulers: he answered to no one. The pirate was not sanctioned by a prince, a king or sultan. No prize court protected him. The morality of thieving on the seas depended on this piece of paper, a document which was so lucrative to Malta that it preceded and would eventually outlive the Order which had nurtured it so well.

Beyond the legal frameworks the book provides the reader with an insight to a bygone era. The world of the Maltese corsair. The word conjures a world of rum, battles, glory and gold treasures. But if some of these belonged to the realm of myth, others contained a grain of truth. The life of a Maltese corsair in the late 18th century was a world of rum, fears, battles, death, enslavement, riches, hard work, lashes, roasted mutton, dashed hopes and a thirst for a better tomorrow. This was the world of a group of men whose lives unfolded in Malta a few hundred years ago. This is what the book published by Heritage Malta is all about.

I: A Principality for Corsairs.

IV: Tools of the Trade: Ships, weapons and aquavit.

Be the first to review “In The Name Of The Prince: Maltese Corsairs 1760-1798” Cancel reply