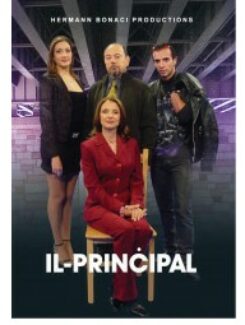 Il-Principal, the hilarious 12 episode comedy penned by Joe Julian Farrugia, will be the next hit in Hermann Bonaci Productions’ series of popular drama. Based on the colourful events of a newly appointed Civil Service Principal Officer, the sitcom takes place both at the Government offices and at the Principal’s home.

Fedele Grixti (John Suda), the new Principal at the Public Relations Section at the Environment Department, is said to have been given the appointment due to his wife Molly’s (Sandra Davis) intimate friendship with the Minister. The couple has two children: Kevin (Gabriel Suda) and Alexis (Samanda Briffa). Kevin, a heavy metal rock fanatic, doesn’t usually see eye to eye with his sister who is obsessed at having her way with men, no matter what the price may be. Both youths do not want to work at all as they find life very easy depending on their parents for cash.

At the office, Frederick (Ronnie Galea) is always complaining that he was the one who should have been promoted. He grumbles a lot and gives away all his work to Catherine (Simone Zammit), a MUSEUM member who only finds relief in crying. Sharon (J.C. Scicluna), the Minister’s nephew, is a showy clerk who knows how to use her power. She is constantly aware of the most particular attention given to her by Charlie (Etienne St. John), the union shop steward.

Gerry (Ray Abdilla) is the section’s lively messenger, often at odds with Frederick but befriends all the other men at the office, not least with Martin (Ray Bone) the lazy policeman posted at the Minister’s office entrance.

Be the first to review “Il-Principal” Cancel reply