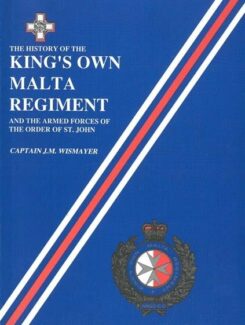 Considerable research coupled with numerous interviews with ex-ranks of the Regiment has helped the author to achieve a masterful chronological narrative on this infantry regiment which includes the official Royal visit of Her Majesty Queen Elizabeth II to Malta on November 14 – 17, 1967. As a backdrop the author has included a detailed narrative about the Armed Forces of the Order, the French invasion of 1798 and the arrival of British and Allied military assistance in the same year.

This book which has taken years to bring to fruition, must certainly find a niche amongst the great human sagas of recorded history.