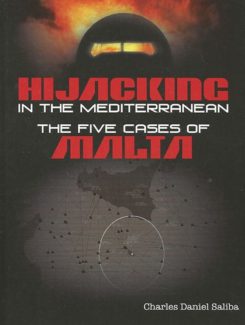 From 1970 to 2000, there were, on average, two aircraft hijackings every month somewhere in the world, with the Mediterranean area being a particular hotbed. Most were committed to extract a ransom for political or personal ends, but it was from these fertile seedbeds that the modern idea of using a stolen aircraft as a suicide missile grew. Although hijackings are much rarer now, their consequences are disproportionately greater. The fear of hijack is ubiquitous at every level from individual passenger to nation-state, so that analysis of these earlier hijacks, which seem almost innocent now, is vital to our understanding of the motives and mechanisms of hijacks, helping us to prevent or defend ourselves against them.

The book supplies this analysis by concentrating on five hijacked aircraft, all of which landed at Malta’s Luqa International Airport, right at the heart of the Mediterranean. They were:

The original aim was to find out why certain areas in and around the Mediterranean are more prone to hijacking than others, but on researching the thousands of words written and spoken about these hijacks, the author found that most accounts were either false or incomplete, so made it his first object to discover and reveal the truth, using published sources, oral interviews, contemporary newspapers, reports, television programmes, discussions with security experts, police reports, procès-verbaux, court reports from experts, press releases and official correspondence. Armed with this knowledge, he set out to prove that security and stability in the Mediterranean, and thus in Europe, cannot be achieved unless regional security problems are addressed. There is an accurate account of each hijack from peaceful takeoff right through to the end of the drama, and each is analysed in the light of the contemporary regional problems that motivated the hijackers. The author also reflects on the changes in the Mediterranean region that have led to the fall in the number of hijackings. There is an extra thread running through the book on the extraordinary accomplishment of Dom Mintoff, Prime Minister of the newly independent Malta, who personally negotiated the successful conclusions of three of the five hijacks with no loss of life at all.

“This book sheds new light on events which have hitherto been distorted by speculation, sensationalism, bias, short memory, or even the self-importance of actors. In this volume they are told vividly, accurately, intelligently, and in their right context, providing a welcome contribution to the narrative of the dramatic events themselves, but also to the country’s history of external relations and security.”