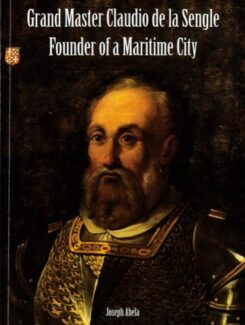 Claudio de la Sengle was born in 1494 in the French province of Beauvais. His discretion, gallantry and piousness opened the way for the first dignities to be bestowed upon him. He was appointed Grand Hospitaller of the Order and served as a General of the Galleys. In 1550 he commanded the Hospitaller troops during an expedition in North Africa. The success of the enterprise was due to his outstanding bravery and his concern for the knights who suffered sickness and endured hunger. A year later he became the Order’s Ambassador to Rome.

La Sengle was elected Grand Master of Malta in 1553 while in Rome. Two years later he assembled a Chapter General to deliberate on the necessary precautions in the eventuality of a Turkish attack. He supervised the task of strengthening Fort Saint Angelo, the extension of Fort St. Elmo and the erection of Fort Saint Michael in Senglea aptly named in his honour as its founder. During the same year a hurricane ravaged the galley squadron and as a consequence 600 men lost their lives. The Grand Master paid from his own pocket for a replacement galley that was to be named San Claudio. Moreover other European Sovereigns made generous contributions to rebuild the squadron. His short lived reign was jeopardised by obnoxious political situations that affected his health most negatively.

The Grand Master passed away on 18 August 1557 at the age of 63. He was buried in Fort Saint Angelo and later his remains were laid to rest in the crypt of Saint Co-Cathedral John in Valletta. Claudio de la Sengle was an honourable and a wealthy man as well as an excellent administrator. He reformed the Statutes of the Order and enriched the treasury by an inheritance of 60,000 scudi.