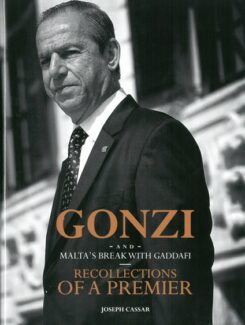 December 2010 – the self-immolation of a vegetable hawker in Tunisia lights the spark that galvanises centuries of dissatisfaction, and precipitates the widespread protests that inflame the Arab world.

Then Prime Minister Lawernce Gonzi, watches as the Arab Spring unravels and spreads to Libya, the proximate neighbouring state with which Malta has a delicate but vital relationship.

At centre stage domestically, with the worst international financial crisis since the Great Depression, the divorce debate and internal dissent brewing in his own Nationalist Party as backdrop. Gonzi faces the greatest test in modern Maltese foreign policy.

Guided by the principle that all peoples have the right to genuine democracy, Gonzi, whilst simultaneously safegaurding Malta’s economic stability and national security, and factoring in Malta’s constitutionally enshrined neutrality, formulates a position on unfolding events in Libya, and determines the role which Malta will play in this crises.