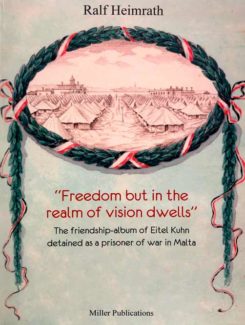 The friendship album of Eitel Kuln detained as a prisoner of war in Malta.

Even though he himself was not a soldier, Eitel Kuhn was captured by British armed forces in November 1914 and was interned in ‘St Clement’s Camp’ in Malta. Under British surveillance, he lived there together with members of the crew of the S.M.S. Emden, of the German ‘Schutztruppe’ (German Protection force) from Africa and other prisoners of war from different nations up to the sixth of December 1919.

In 1916 he started to create a friendship album, in which many of his fellow prisoners of war left their hand-written contributions. The latter include aphorisms, citations and personal formulations which serve as witness to the concerns, counsels and personal formulations which during their common difficult times during the First World War. Among these texts, one also finds a section of Schiller’s poem ‘Der Antritt des neuen Jahrhunderts’ (the beginning of the new century) and the verse ‘True freedom only in the realm of vision dwells.’ No other sentence expresses better what the writers of these lines felt in the prison camp at the time.

As well as the album itself, the reader can read further personal information about the album’s then owner as well as about the former prisoner of war camp, ‘St Clement’s camp’ on the island of Malta, where Kurh was forced to spend more than five years of his young life.