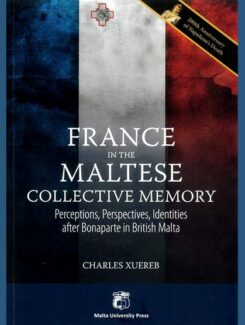 Charles Xuereb’s interest in the Maltese collective memory of the French period goes back decades, to his teaching days of the French language. Following an M.Sc. in  Media Management from the University of Stirling, he graduated Ph.D. at the University of Malta (Institute of Maltese Studies) with a thesis on Maltese identity, taking Bonaparte’s tumultuous interlude on the Island (1798-1800) as a social science test case. His educational broadcasting and journalistic 45-year career proved pivotal in this exhaustive and challenging research as the media, education and text were the principal influential instruments used to shape the nation’s memory over the past two centuries with perpetuated distortions and manipulated perceptions under the aegis of British colonial rulers and the Catholic Church. Born in 1948, Xuereb is a product of the post-war waning colonial empire that gave birth to Malta’s independence in 1964. In 2011, he received the prestigious Napoleonic title of Chevalier de la Légion d’Honneur from the French Republic for his continuous efforts to promote French culture in Malta with a nostalgic feeling of its presence on the island during the three-hundred-year epoch of the Knights. Dr Xuereb is a part-time lecturer at the University of Malta.