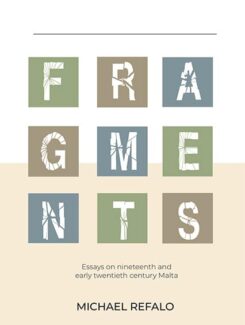 The papers making up Fragments cover a variety of aspects of Malta’s late 19th and early 20th century. The subjects chosen can, in some sense, be considered marginal to the ‘grand’ political history of the Maltese Islands during that period, hence Fragments. They focus on diverse social, political and cultural aspects of Malta’s history that have been broadly ignored. In so doing, they assist in providing a deeper understanding of Malta’s colonial predicament and of the processes of change underlying different strata of Maltese society during the period.

■ Noise, smell and other nuisances: Valletta c.1880s – c.1930
■ ‘Our English visitors’ – Some British women in Malta during the nineteenth century
■ ‘Shylock walked in before Capulet.’ The assault on the status of the Maltese nobility during the late nineteenth century; and an example of the heterogeneity of voices in colonial rule
■ The discourse on the problem of begging and almsgiving in late nineteenth century Malta
■ Sacriﬁce in a Roman Catholic Church
■ Malta connections: The Austro-Hungarian Empire (1830s-1914)

Be the first to review “Fragments” Cancel reply