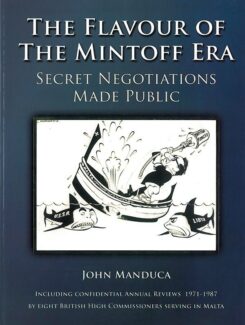 This is a lucid and concise account of the mementous negotiations which took place between Malta and Britain in 1971 to 1987, details of which have remained secret for over thirty years.

For the first time, what went on behind the scenes, the brinkmanship and the tantrums, the manoeuvres and the intrigue indulged in by several countries becomes public knowledge following the passage of time and the enactment of the Freedom of Information Act in the United Kingdom.

These protracted, and sometimes acrimonious negotiations resulted in a new Defence and Financial arrangement (valid for seven years) and the departure of the British forces from Malta, bringing to a close an association in times of war and of peace which had lasted for nearly two hundred years.

The Flavour of the Mintoff Era is based, in the main, on confidential ‘Annual Reviews’ and dispatches sent to the Secretary of State for Foreign and Commonwealth Affairs in London by eight High Commissioners serving in Malta. These Reports are detailed and outspoken and many new facts come to light for the first time. They make a valuable contribution to Maltese history and politics, and give us an insight into Dominic Mintoff’s views on countries such as Italy, Libya, Israel, North Korea, China and the Soviet Union, and record the efforts by the United States and other Western countries to deny facilities to the Russians, they also deal with the Maltese Prime Minister’s meetings with Lord Carrington, Mr Edward Heath an d Mr Joseph Luns (of NATO), and the attempts at mediation by Archbishop Miachael Gonzi.

Reports by the British High Commissioners are supplemented by the author’s contribution on matters such as the dispute over Church schools, the take-over of Broadcasting, the  bitter conflict  with the Doctors and the expulsion of the ‘Blue Sisters’, the collapse if the National Bank and the use of violence and abuse of human rights.

The ‘Forward’ to the publication us by Dr Albert Ganado, a noted historian, and the book also includes a final chapter giving the author’s recollection of his stay in London when High Commissioner for Malta.