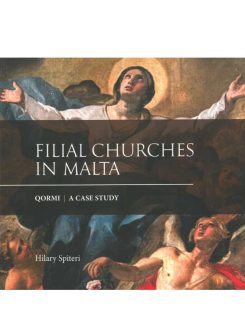 “Qormi has a great documented history dating back to well over six centuries. Relatively speaking, its population has always been among the most numerous in the Maltese islands. Over the years, it has produced its fair share of men of letters, artists, and members of the established professions.”

“Many people have written about the Maltese so-called “chapels” that, strictly speaking, should be termed “small churches”. The small filial churches of Qormi are no exception and have been the subject of a plethora of short writings in the past by a number of authors, including myself. However, when I delved through this new work by Mr Spiteri, I could not help admiring the great amount of effort he has undertaken to unearth new information that has remained hidden in various archives for a number of centuries.”

Be the first to review “Filial Churches In Malta” Cancel reply