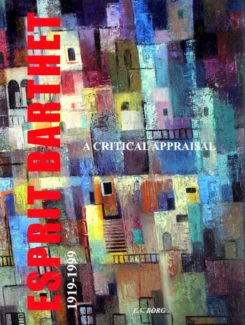 Esprit Barthet (1919 – 2019) is the best exponent of a particular, vital and unique artistic expression in Malta between 1950 and 1990. His intense verve and expressive vision and concept dominated the local scene consistently, insistently and persistently and contributed in no small way to the development of the visual arts.

His total involvement and application of his emotional and sentimental expression tempered with a classical and academic study made his language so loved and popular, so universal, that early in his career he became a myth. Such mythical fame is clearly and vividly demonstrated by fervent admirers of his art in early countless newspaper articles and letters to the editor since the 1950s by art critics, correspondents and art lovers. This testimony has become a useful document.

The Maltese are the heir of his prolific output. He was so multifaceted in the choice of expression that he left behind him hundreds of landscape and seascape, still life, self-portraits, portraits, rooftops, nudes, abstract and geometric abstract, sacred art, drawings and sketches. Such variety demonstrates beyond a shadow of doubt his great talents and his yearning for bravura and virtuosity without losing a human touch, a pure simplicity and a humble approach. His career is marked by an unflinching determination to outstrip himself in reaching a level of excellence perhaps never achieved before by his peers. Undaunted he studied, searched and researched to challenge the reality in life, to capture it in paint on canvas almost in an obsessed and insane manner until it became a spiritual pursuit.

A family man, a kind of art master, a gentle friend to many, he soldiered on without losing a humble and patient approach to achieve his vision, to create beauty. His life was dedicated to art. He spent long hours in his studio with paint brush and palette in hand in front of his easel putting blobs of paint on canvas.

His works are exhibited locally and internationally; at the Commonwealth Institute, London, Germany, Strasbourg, Tripoli, Tunis, Vienna, Paris, Moissae, France and his portrait is exhibited in the Vasari corridor part of the Uffizi Gallery in Florence.

Be the first to review “Esprit Barthet 1919-2019: A Critical Appraisal” Cancel reply