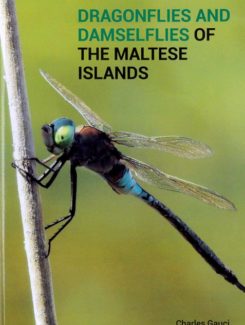 Dragonflies are large, often brightly coloured, insects which few people would not notice actively flying over water, whether it is while walking along water reservoirs in valleys or while visiting gardens where water features are present. However, these are only one stage in their life cycle after having spent a much longer period living under water as larvae.

Most species of dragonflies and damselflies are highly habitat specific in both their larval and adult stages. The Maltese Islands lack most types of riparian habitats and as a result the number of species found locally is very small. This is compensated for by the high concentration of these insects at most water bodies.

This book describes each of the nineteen species recorded in the Maltese Islands and each species is amply illustrated by photographs which, for the commoner species, illustrate most or all the stages in their life cycle. It is hoped that besides being of help and interest to nature lovers, it will also raise a much needed awareness among the general public about biodiversity and nature conservation.

The author spent fourteen years teaching Integrated Science and Biology at secondary State schools before moving to the Għadira Nature Reserve where he was Managing Warden until his retirement twenty four years later. He has been interested in dragonflies for the last ten years. Having been an avid bird watcher since his early teens. he co-authored a number of ornithological books – Bird Studies on Filfla, L-Agħsafar, A Guide to the Birds of Malta, A New Guide to the Birds of Malta and The Breeding Birds of Malta. He also co-authored several ornithological papers and was the editor of BirdLife Malta’s scientific journal ‘il-Merill’ from 1986 to 1994. Since his initial interest in dragonflies in 2008 he has been so fascinated by these wonderful insects to the extent that they now often take precedence over birds.