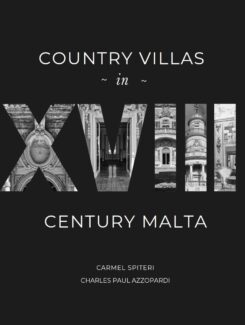 Country Villas in XVIII Century Malta reviews an interesting niche subject in the history of the architecture of the Maltese Islands, that of the construction of suburban villas for the leisured classes in the eighteenth century. Not much has been written on the topic to date. This new study contributes invaluable insights to this particular area of research and will add to the existing knowledge. The trend of building villas outside city walls in Malta was established by the Knights of St John. The leisured classes on the island followed suit. The publication focuses on three particular estates, Villa Preziosi, Villa Bologna and Villa Gourgion, all built in the eighteenth century in an area known as the Three Villages, which still boasts of a significant concentration of similar country villas.

Several architectural drawings made by the author are included within the text and supplement the numerous black and white photographs by Charles Paul Azzopardi purposely commissioned for this publication.