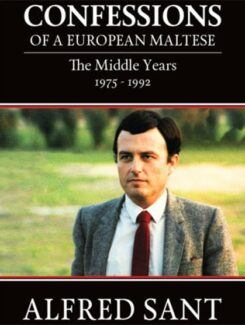 The years 1975 – 1992 were a period of conflict and transition all over the world, as well as in Malta. Alfred Sant’s memoirs “Confessions of a Maltese European”, provides a personal chronicle of his experiences during those years. They start with his years in Boston, at a time when US society was absorbing the shock of the resignation in disgrace of President Richard Nixon.

Sant’s story then shifts to Malta. It covers the years leading to the successful finale of the Mintoff administration’s effort to eliminate once and for all the island’s reliance on the military base operated from it by the British. Meanwhile political conflict picked up and remained a feature of the Malta scene for long years to come. In 1977 Karen Grech was killed by a bomb sent to her father’s house; in 1986, Raymond Caruana was shot dead at the PN’s club in Gudja.

Described by Sant as his “middle years”, the period also featured huge transformations in Malta’s economy, educational system and political behaviour. Reflecting these changes, his account repeatedly alternates points of view  – from how the government system under Prime Minister Mintoff was run, to the shift in industry from textiles and clothing to pharmaceuticals and electronics; from the new ideas that began to permeate the Labour Movement in the mid-1970’s to the pro-EU membership drive of the Fenech Adami administration in the late 1980’s; from Labour’s internal politics till Dr Karmenu Mifsud Bonnici succeeded Dom Mintoff as Prime Minister in 1984 to when it accepted to let the rules for the 1987 election be changed so that the party winning the absolute majority of the popular vote would be guaranteed the government, and beyond.

Sant’s experiences as a management consultant, industrial leader, academic, journalist and editor, diplomatic agent, Labour Party militant and president, novelist and dramatist and finally Labour MP stamp the mark of authenticity on these unusual and uninhibited memoirs. Even about things that one thinks are well-known, he has new things to say.