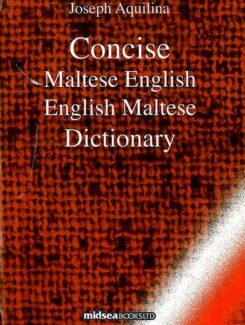 Professor Joseph Aquilina B.A., LL.D., Ph.D., born in Munxar Gozo, 7 April 1911. Educated at the Bishop’s Seminary Cozo, and later at the University of Malta and the School of Oriental and African Studies of the University of London (1937-1940). He was the first holder of the Chair of Maltese and Oriental Languages (1937-1976) at the University of Malta where he also became Dean of the Faculty of Arts (1948-66 and 1972-75). He was also Pro-Vice Chancellor of the University of Malta (1970-1974), President of the Society of Arts Manufacture and Commerce (1972-1982) President of the Association of Teachers, Royal University of Malta (ATRUM), (1952-76) and President of the Association Internationale D’Etude des Civilisations Mediterraneennes (1972-82). In 1986 he was elected member of the Council of the Faculty of Theology. His literary awards include Gold Medal Ġuże Muscat Azzopardi (1966). He became Fellow of the Royal Asiatic Society of Great Britain and Ireland (1963) and was editor of the Journal of the Royal University of Malta Literary Society (1932-37) Leħen il-Malti (1940-76) Tagħlim għall-Kbar (1953-65), Journal of Faculty of Arts (1957-76), and Journal of Maltese Studies (1961-76). His scholarly interests range widely over the field of Semitic and Romance linguistics. He also read papers at several international linguistic and onomastic Congresses and is the author of linguistic and literary books. Professor Aquilina passed away on 8 August 1997.