A Century Of Enterprise On The Mediterranean Island Of Gozo. 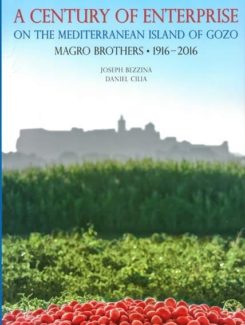 A Century Of Enterprise On The Mediterranean Island Of Gozo.

“This book is intended to be a lasting tribute to my grandfather Ġanni Magro, who founded the company Magro Brothers in May 1916, as well as to his sons: my father Manwel, and his two brothers Wiġi and Ġużepp. It is indeed a tribute to the past business community of Gozo and it is my hope that it will serve as an inspiration for future generations of Gozitan entrepeneurs.”

This book provides a researched and outstanding insight into the history of enterprise on the Mediterranean island of Gozo during the past one hundred years. After a glance at the seven millenia-long history of Malta and Gozo, the author delineates the social and economic state of affairs in the early twentieth century with special emphasis on the community of the village of Xewkija where the firm Magro Brothers was founded in 1916 and where it thrived during its early years.

Business in Gozo started to gather momentum at the turn of the twentieth century. Ġanni Magro, the firm’s founder, succeeded to overcome the double insularity of Gozo and the poor inter-island communications and led his firm from strength through strength. The author outlines the history of the firm from its inception and chronicles its growth throughout one hundred-long years. One great achievement of the Company is that it started in Gozo and proceeded to operate from the island notwithstanding logistic difficulties of all sorts.

Research for the writing of this book was carried out in several archives in both Malta and Gozo, in contemporary and later publications, as well as in the many newspapers published in Malta at that time. The end result is this detailed account of the leading enterprise of Gozo enhanced by the superb photography of Daniel Cilia.

Be the first to review “A Century Of Enterprise On The Mediterranean Island Of Gozo.” Cancel reply