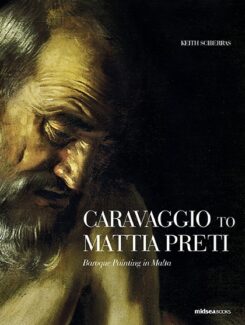 The title CARAVAGGIO TO MATTIA PRETI aptly provides the parameters that span seventeenth century baroque painting in Malta. Caravaggio’s move to Malta in 1607 opened this magnificent chapter in Maltese art, to which the island responded with extraordinary artistic foresight. Malta offered Caravaggio security, but more importantly it offered him the opportunity to redeem himself. On the island, the power of Caravaggio’s brush and the celebration of his virtuosity overcame the dishonour of his lifestyle, despite the fact that this materialised in a Catholic frontier country until then renowned, not for the artistic patronage of its rulers, but for its military austerity.
During this period, Malta was ruled by the Knights of the Order of St John and their fascinating political context impinged significantly on the character of its art. Their political clout and their eight-pointed cross attracted other artists, including Mattia Preti, whose four-decade stay on the island defined the triumphant manner of Maltese baroque art. Preti’s death on the island in 1699 came at the end of the century.
This book discusses the work of the major artists who painted on the island during the seventeenth century and analyses the context in which they were produced. It also discusses paintings of importance that were sent from mainland Italy and reviews them and their critical fortune within the story of Maltese art.

To be launched and published soon. Order being accepted.

Be the first to review “Caravaggio To Mattia Preti” Cancel reply