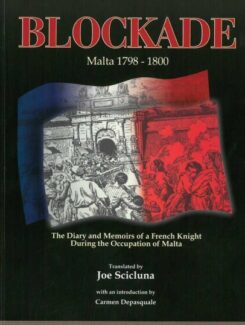 “Apart from donkeys, mules and horses, which we continue to eat as before, we have now also eaten most of the dogs and cats as well as a good number of large rats”

Bosredon de Ransijat spent more than 30 years living among the Maltese, first as a Knight of the Order and later as President of the Government Commission during the French occupation. In his latter role he was blockaded with the French garrison within the city walls of Valletta. In his diary he describes just how determined they were to keep Malta in French hands and the hardships they endured during this two-year standoff with the Maltese country folk and the English Navy. Ransijat also gives his own in-depth analysis as to why the Maltese were glad to see the end of the Order’s rule and why they turned so quickly against their new French rulers.

This book is not only about the French occupation, it is also about Maltese scoiety in the late 18th century and above all it is the story of an extraordinary Frenchman who was bold enough to defen his depest personal convictions.

Ransijat’s memoirs are undoubtedly among the most important historic documents concerning the French occupation of Malta, for one very simple reason: he was there.