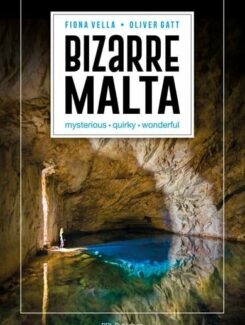 Hand in hand with Fiona Vella and Oliver Gatt we walk through quite untrodden paths. Most visitors and other curious travellers usually herd and stop at the tourist traps, certified as such by the hundreds of thousands who did it before. The weight of repetition bestows credence upon places and validates their claims to high visibility. This book sets out to be totally different – it beckons readers in the opposite direction. It tells us: be the first. It tells us: there are still corners tucked away in the fold of the islands’ geography or in the nooks of their history where the attraction lies not in the spectacular, in high creative art, in objects that evoke crucial moments in history, but in neglected, mysterious, weird, inexplicable buildings, or places, or phenomena. The façade of a village house damascened in seashells – Renzo Piano it ain’t, but nonetheless it is a spectacular monument to single-mindedness and the ego’s craving to stand out as different.
Such a ‘guide book’ has never been done before, certainly not on the systematic scale that the authors have undertaken in this volume. The closest was the easier and the more obvious: a ramble through the spooky abodes of ghosts, apparitions, spectres, and the paranormal, which still seem to hold interest for some. Frankly, I have little time for anything that requires me to suspend both belief and disbelief. The authors are here on far surer, though equally intriguing, grounds. They introduce the realm of the opaque, the paradoxical, the irrational, the absurd, the impervious. I wonder why they left the law courts out.
by Giovanni Bonello
By: Fiona Vella & Oliver Gatt
Format: paperback
No of pages: 320

Be the first to review “Bizarre Malta” Cancel reply