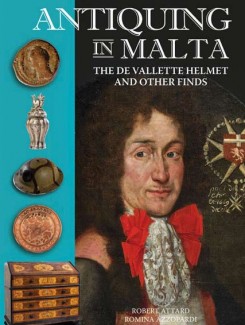 This book tells the stories of ‘Maltese’ treasures lost and found. The first chapter explores the history of the de Vallette Helmet previously in the prestigious Odescalchi Collection. The rest of the book opens the doors of secretive collections describing important privately owned antiques; from rare Romano-Maltese coins and ancient artefacts to unpublished portraits of Knights and from exceptional portraits to precious pieces of Maltese silver and Maltese furniture.

The authors try to bridge the gap between antique collecting and academic research by publishing artefacts of immense historical significance and some of the finest ‘Maltese’ antiques in private collections; the oldest known portraits of Grandmasters L’ Isle Adam and Verdala, majestic Maiolica and ceramics, important manuscripts, unpublished Maltese views and works of art attributed to Old Masters.

Maltese private collections are impressive incorporating objects that are identical to pieces kept at the Victoria and Albert Museum, the Metropolitan Museum of New York, the British Museum, the Museum of London, the Royal Collection, the Landesmuseum of Brunswick and other important collections. Items deserving special mention include museum quality oriental ceramics from the ‘Ming Gap’, unpublished works by Gianni, Schranz and Brockdorff, magnificent baroque paintings, musical scores by famous Maltese composers, exceptional Militaria, items associated with Grandmasters and famous political leaders, some of the largest pieces of Maltese domestic silver that are known to exist, and the arms and armour of the Knights of Malta and their foes.

This book brings to light a rare account of the French invasion of Malta, a curious manuscript documenting Grandmaster de Rohan’s admission of a French Countess to the Order of Malta, the world’s second largest collection of ship portraits by Camilleri and many other treasures that are behind closed doors. State Museums and private collectors are working hard to return Malta’s lost treasures because important Maltese pieces are being traded on the international market. This book discusses the phenomenon of ‘collecting history’ studying interesting Melitensia that has recently been offered for sale, from the de Rohan musket to ‘Christie’s Judith with the head of Holofornes’.

Be the first to review “Antiquing in Malta.” Cancel reply