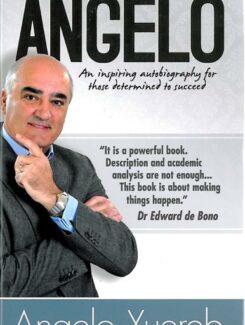 An inspiring autobiography for those determined to succeed.

Angelo Xuereb was no ordinary little boy; he spent his time planning and constructing rooms out of rubble, working tirelessly on his father’s farm and dreaming of a time when he would be a successful businessman. Even at a young age there was no doubt in his mind and this is a trait that would take him all the way to the top. It wasn’t easy, however, especially as his father had already decided that his eldest son would take a steady job at the bank.

Angelo’s determination and defiance led him to seek out his fortune alone, with only a small loan from his girlfriend to get him started. From these humble beginnings, he went on to create AX Holdings, a multi-million-Euro group of companies, and to reign as Mayor of his home town.

This autobiography not only documents Angelo’s successful career, but highlights the obstacles that a young entrepreneur was forced to face in Malta in the post-war years. At a time when Malta’s independence from the British should have prompted the government to encourage enterprise, it is ironic that many of these obstacles were deliberately put in place by their own boards and authorities. However, petty bureaucrats were never able to keep Angelo down for long, and the tale of how he built his way to success will inspire any budding entrepreneur.

Be the first to review “Angelo” Cancel reply