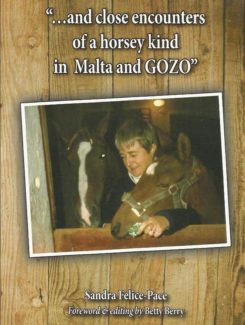 Sandra Thornton brought up in the City of Salford had a childhood marred by medical problems. She found solace in the presence of horses and her mother encouraged her in this pursuit by going out of her way by visiting with her the stables of the brewery horses nearby. A near fatal accident in her early teens caused her long lasting problems but again the pictures of horses sent to her by the generous British public while in hospital helped her to overcome her discomfort. In 1970 she married Salvu Felice Pace and on her first visit to Malta and Gozo she discovered that the islands were a horsey paradise. On their frequent visits to the island they made friends with a karrozin owner in Malta who later by pure chance they met in Gozo where he introduced them to Vestru, a horse trader, breeder and jockey. They ended up buying a filly from him, they called her Sugar and she became part and parcel of Ghasri village life. Eventually she had a foal.

The book edited and forwarded by Gozo’s well known animal welfare pioneer Betty Berry, is a good read and is a vivid description of how one can build up a friendly relationship with an animal. The author delves into characters she met through Sugar’s friendliness and gives an insight in the horsey world in Gozo in the 70’s and then re-visited in the 90s.

Be the first to review “.... And Close Encounters Of A Horsey Kind In Malta And Gozo” Cancel reply