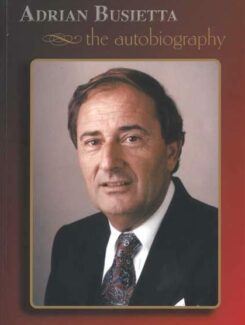 This hijack directed by Mr. Mintoff produced a record withdrawal from a Maltese bank and will long be remembered as a banking debacle.

On 24th March 1974, the Bank of Valletta opened for business. This was a bank that clearly had been created by Prime Minister Mintoff following the forced appropriation of the assets, properties and money of the National Bank of Malta shareholders.

Did the Central Bank do its utmost? That is for the reader to judge.

However, as with their Labour Party colleagues, the Nationalist Party did nothing at all. Everything remained on the shelf, smouldering under dust, time and grime. This has rendered them to be nothing more than passive accessories to the 1973 theft.

National Bank Shareholders are still waiting to be paid their dues by the now so called (BOV) Bank of Valletta.

Adrian Busietta’s affidavit says it all.

Be the first to review “Adrian Busietta - The Autobiography” Cancel reply