A Publishing History Of A Prohibited Best-Seller 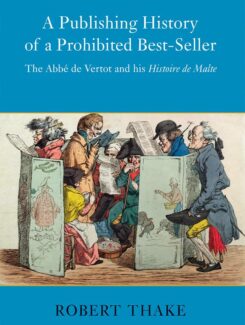 A Publishing History Of A Prohibited Best-Seller

A Publishing History O A Prohibited Best-Seller – The Abbe’ De Vertot and His Historie De Malte.

This remarkable and entertaining study examines perhaps the most notorious example of a book whose enormous popular success was due almost entirely to its being banned by the Vatican. The story of the Abbe’ de Vertot and his Histoire de Malte will fascinate scholars of the history of the book, printing in the eighteenth century, enlightenment printing trends, the history of Malta and the Hospitalier Order of St. John, and the history of censorship. Histoire des Chevaliers Hospitaliers de S. Jean de Jerusalem, affectionately referred to as Histoire de Malte, was written by the Abbe’ de Vertot and printed in Paris in four quarto volumes in 1726. The author, a provincial clergyman who attained great fame in the capital of the monde philosophe, was commissioned by the Order of St. John to be its chronicler and compose a history of the Order from its humble origins in Jerusalem until the year of publication. Vertot spent thirteen years composing the work but the product was far from what his patrons expected. What was meant to be a chronicle of the Catholic Order ended up attracting the ire of the inquisition due to the numerous anti-papist statements which the author included and, shortly after it saw the light, the publication was buried in the Vaticans literary cemetery, the Index Librorum Prohibitorum. This study is based on hitherto unpublished sources from nineteen archives and libraries around the world.